Happy Sunday! As mentioned in my last blog post, I recently made a purchase from JList that consisted of a bunch of bento supplies, a taiyaki maker and a bento box, The "Red WAON Bento box set". 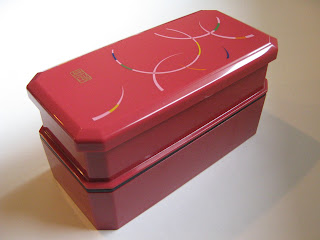 I've wanted a stackable bento box for awhile, and this turned out to be perfect for me. It has good volume and holds a decent amount of food (JList gives its dimensions as 3.5" high and 5.5" x 4" with a volume of 400 ml on top and 320 ml on the bottom). It isn't too bulky, so I can fit it into the shared fridge at work. It's also very pretty and sleek, but not childish. 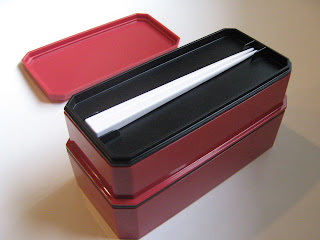 The black lids stack in their compartments easily, and I found that they helped keep the food in place. There is a moveable divider in the bottom compartment that didn't make it into the pictures, it is made of the same red plastic as the box. I found that divider really handy, because it fits into the box very well and makes it easy to separate foods and adjust for larger or more awkward pieces of food.

Now, it may seem silly, but my favourite piece here was the bag. Maybe it's because I've never had a bento box that came with a bag before, or maybe it touches some part of me that really likes accessories, but I absolutely love this little bag. The box itself is pretty on its own, but adding the bag just makes a fantastic thing better. It's the icing on the cake. It's just a little thing, but it's a nice touch. And it makes it much easier to carry your lunch with you.

The downsides to this box I think are few and far between. But there are a couple of things that some people might not like. If you like your lunch hot, you'll have to take it out of this box to reheat it. The WAON box is not microwaveable, nor is it dishwasher safe. And it isn't liquid tight; you can't really pack anything soggy or watery in this without it leaking.

Other than that, I've got to say that this bento box was pretty much exactly what I was hoping it would be. It's sleek, it's cute without being childish, the containers and moveable divider make it simple to pack a lunch in a hurry, and the compartments do a more than adequate job of helping to separate foods that I don't want to "mix" inadvertently. So if you don't mind the downsides, I'd definitely recommend this box. It's simple, attractive and the pretty bag makes your lunch look like a present. :p
Posted by Probably Bento at 2:46 PM 1 comment:

Probably Bento
Probably Bento is a 38 year old woman who lives in Canada with her family and very, very occasionally (sorry) writes two blogs (one about Bento, and a personal blog).